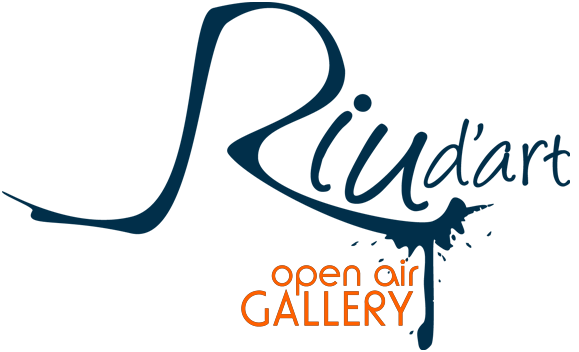 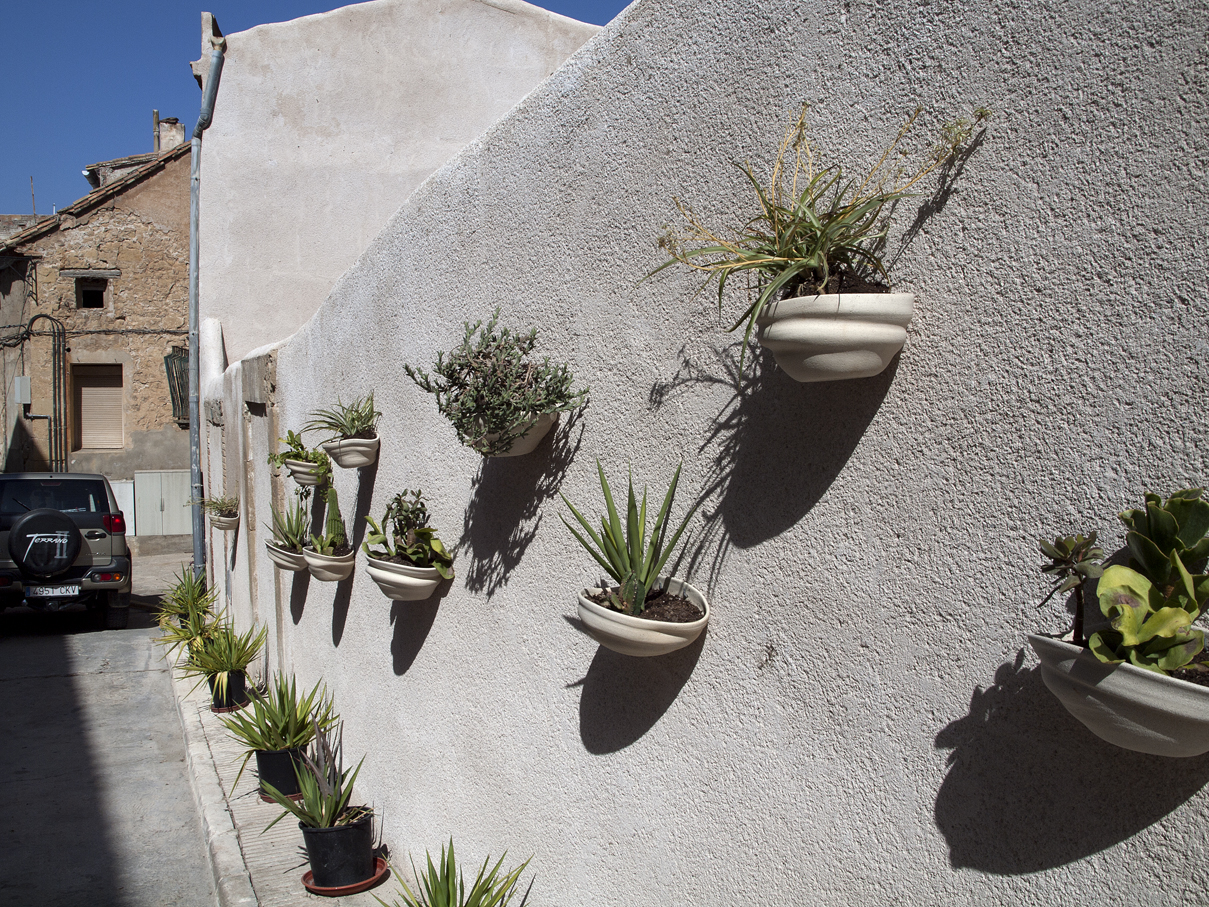 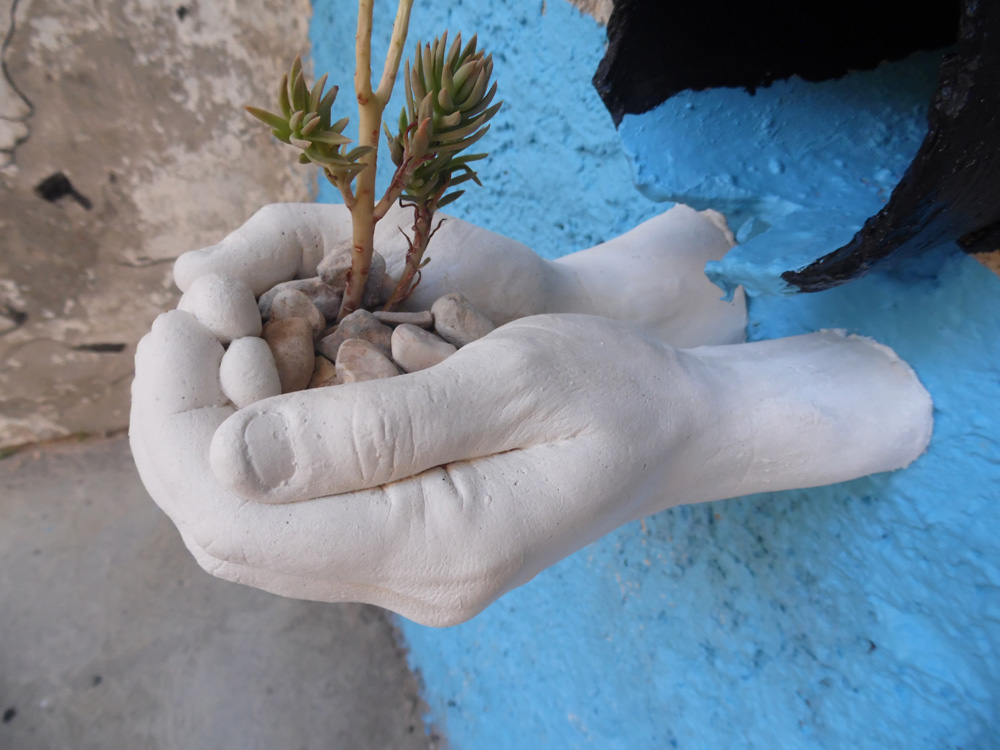 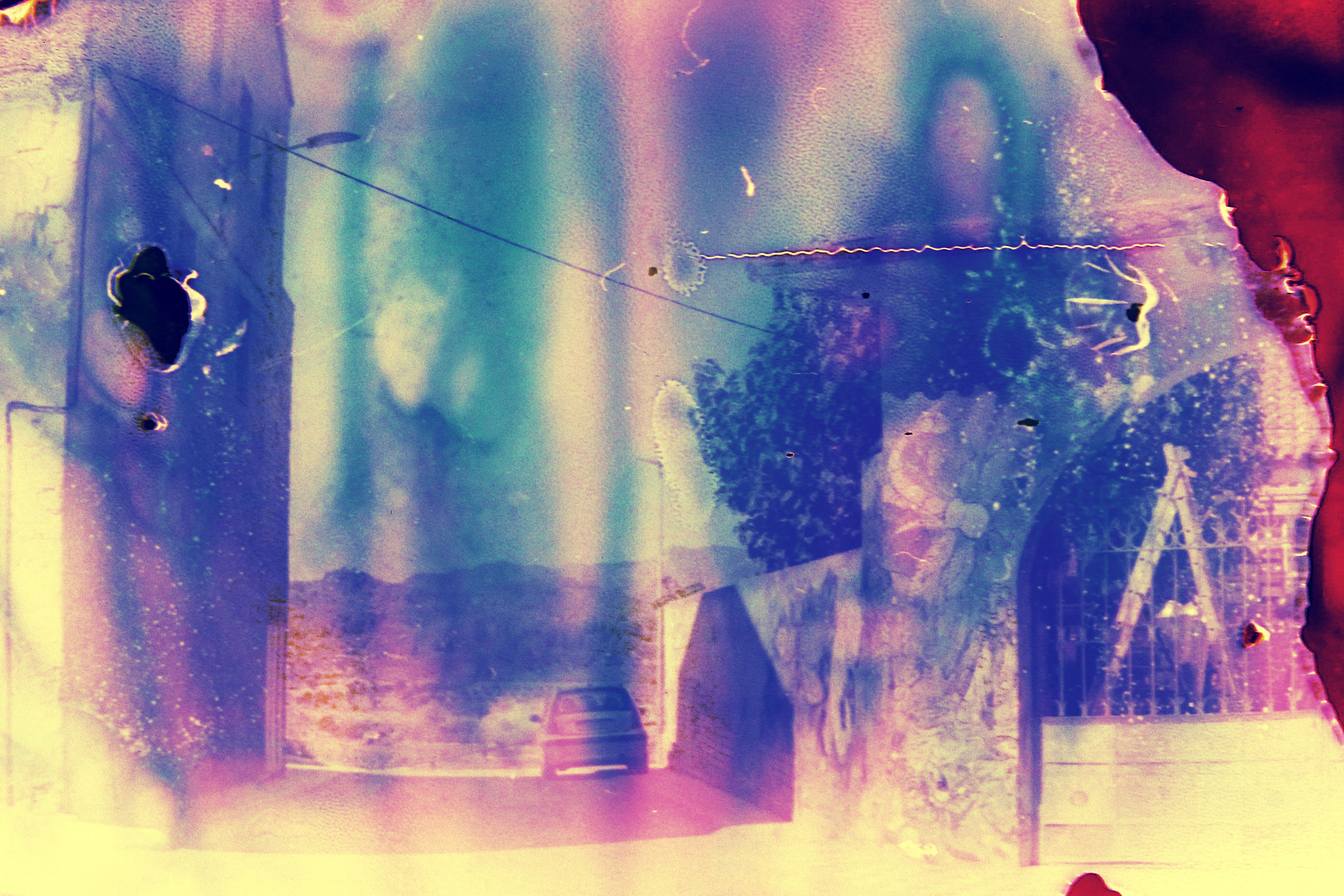 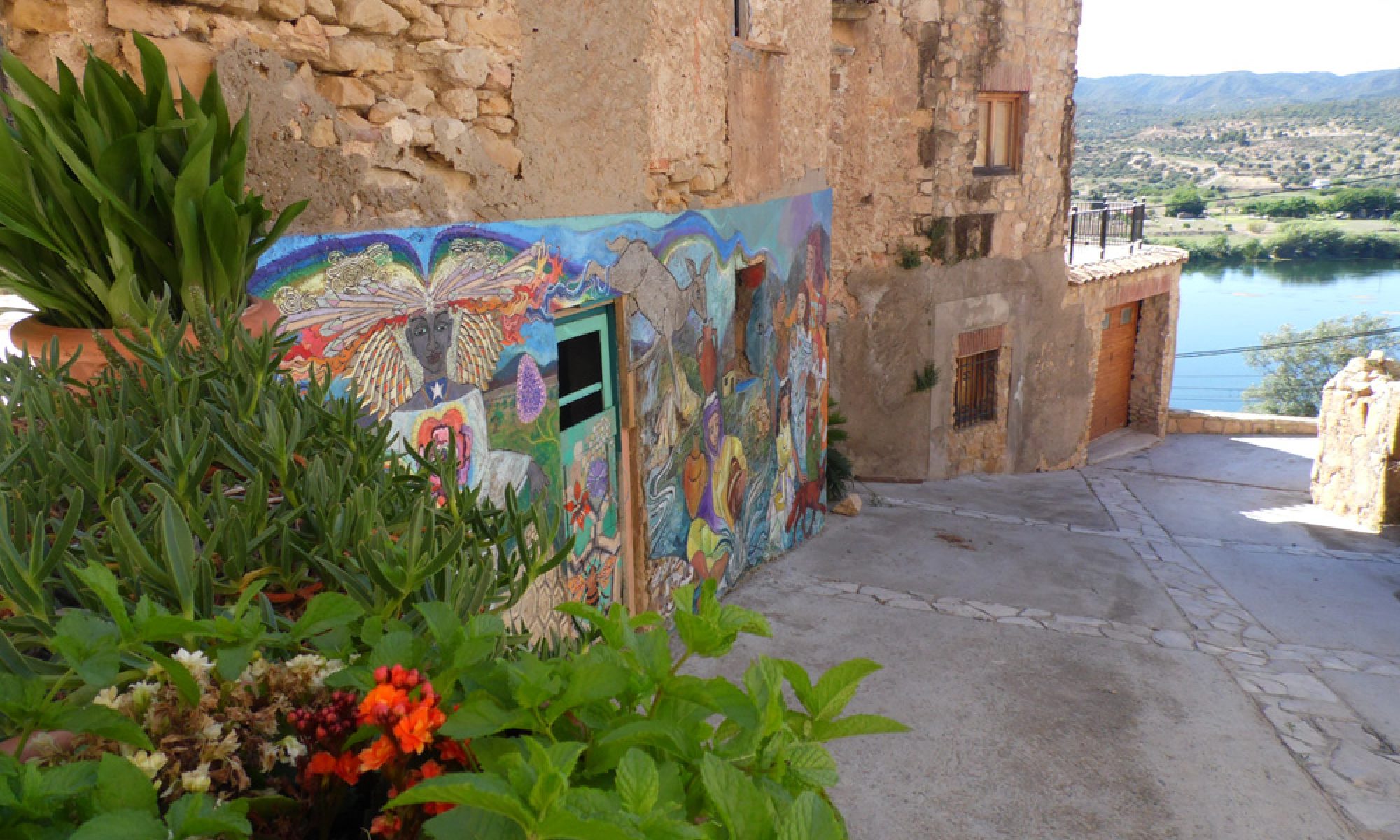 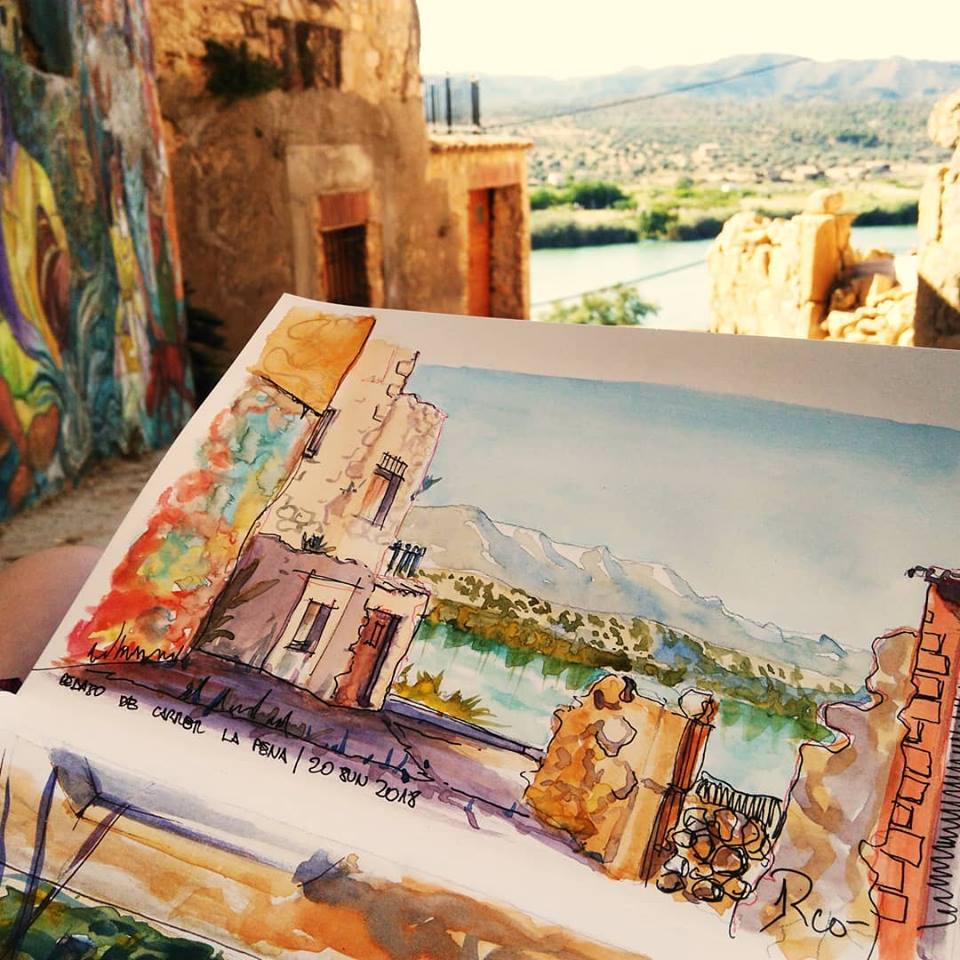 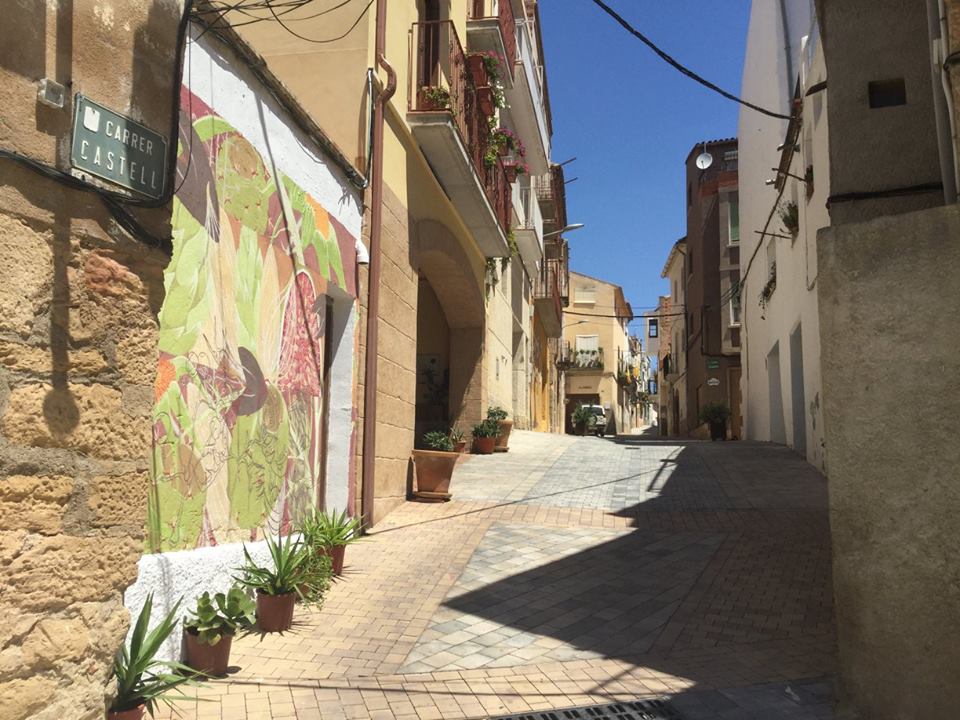 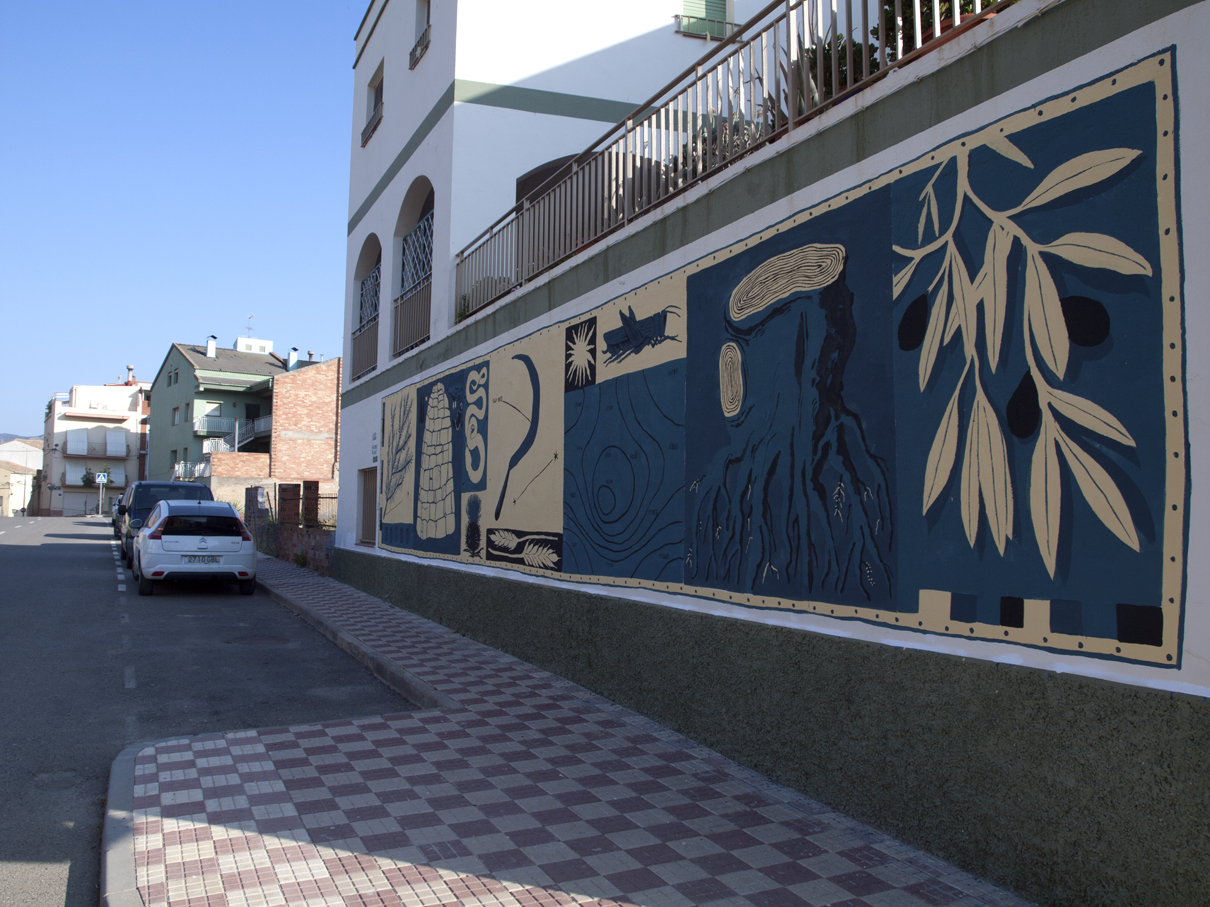 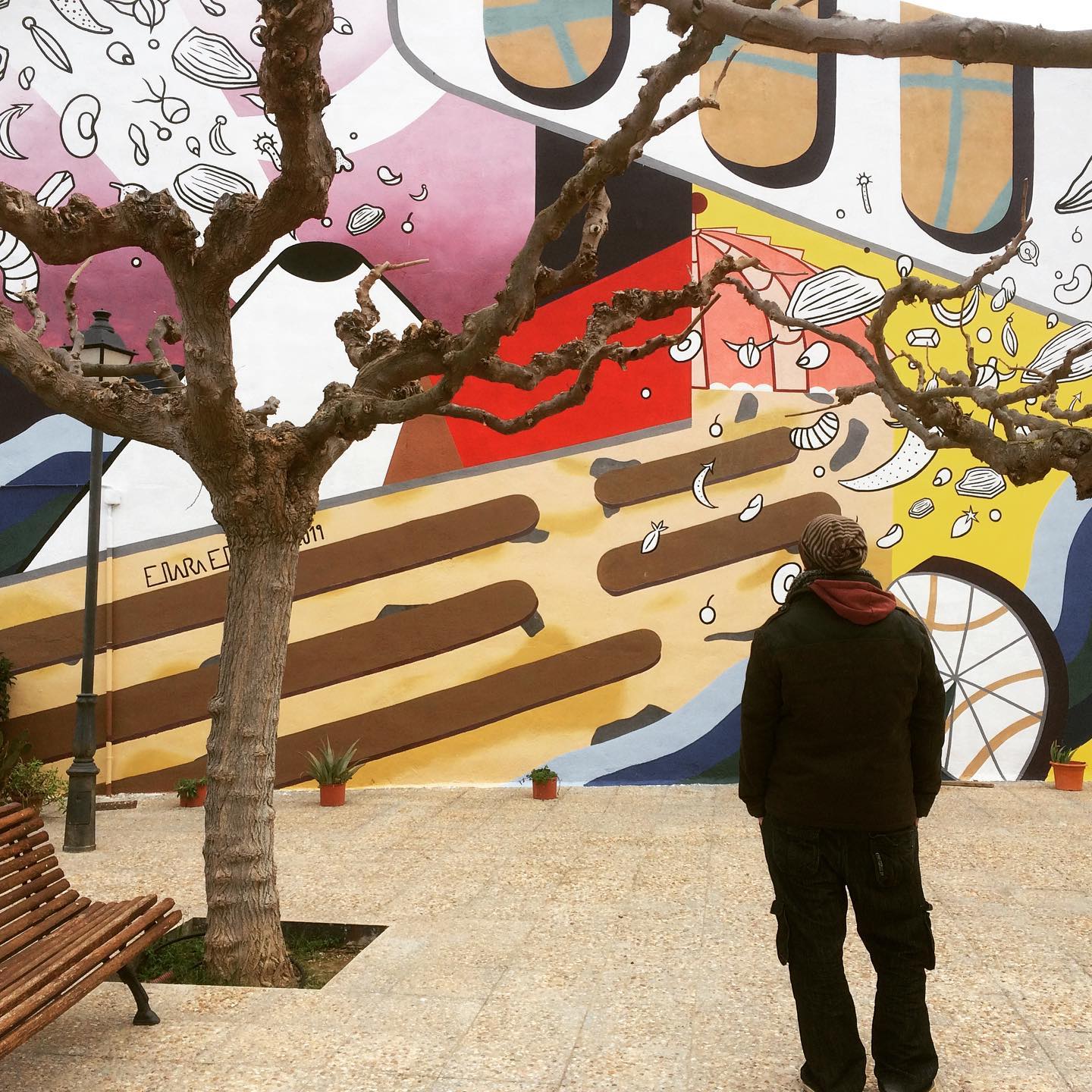 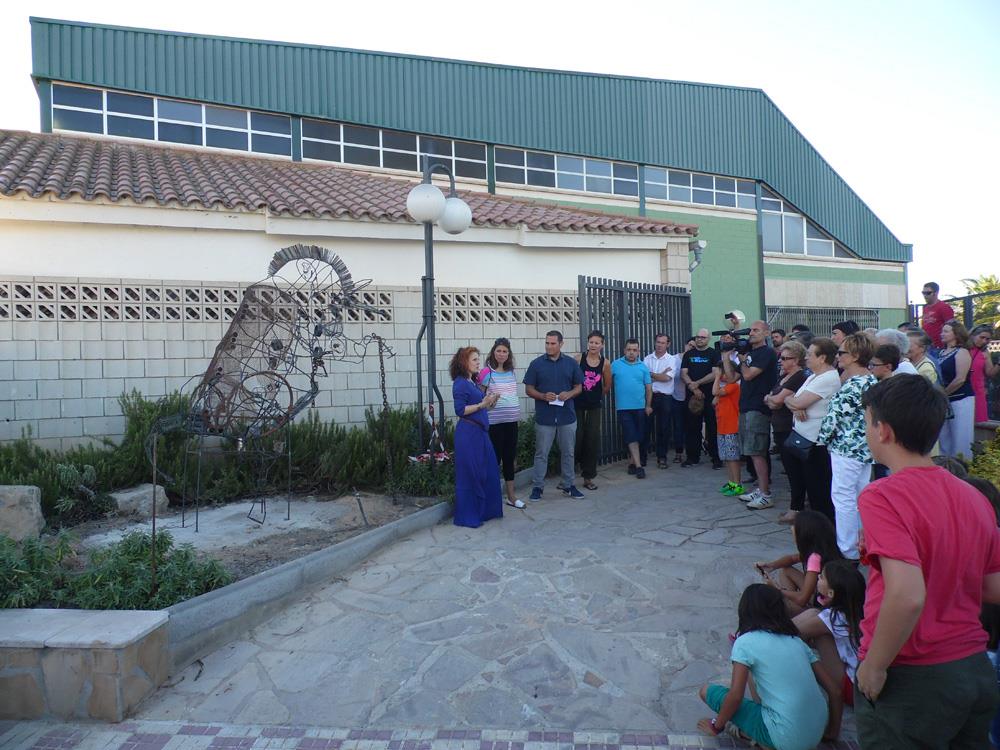 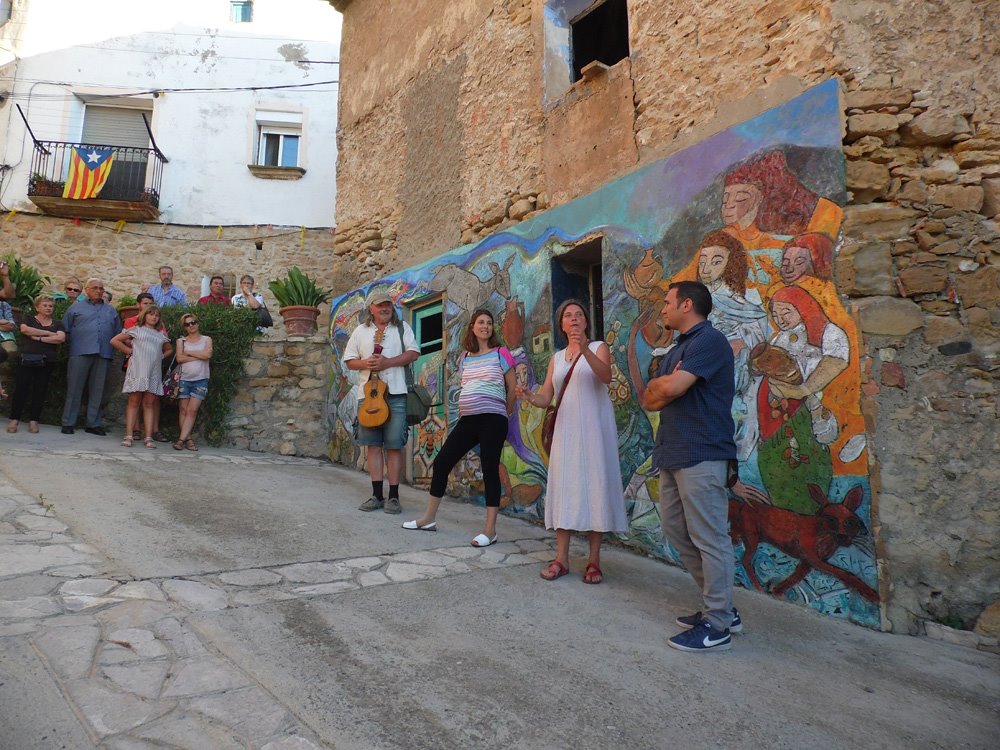 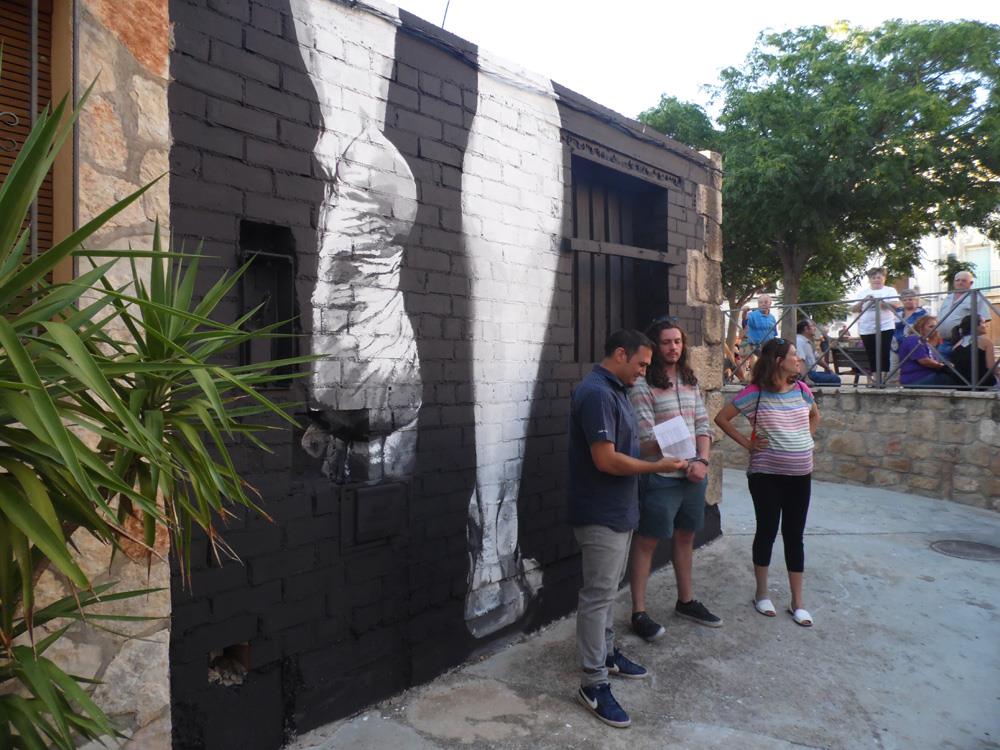 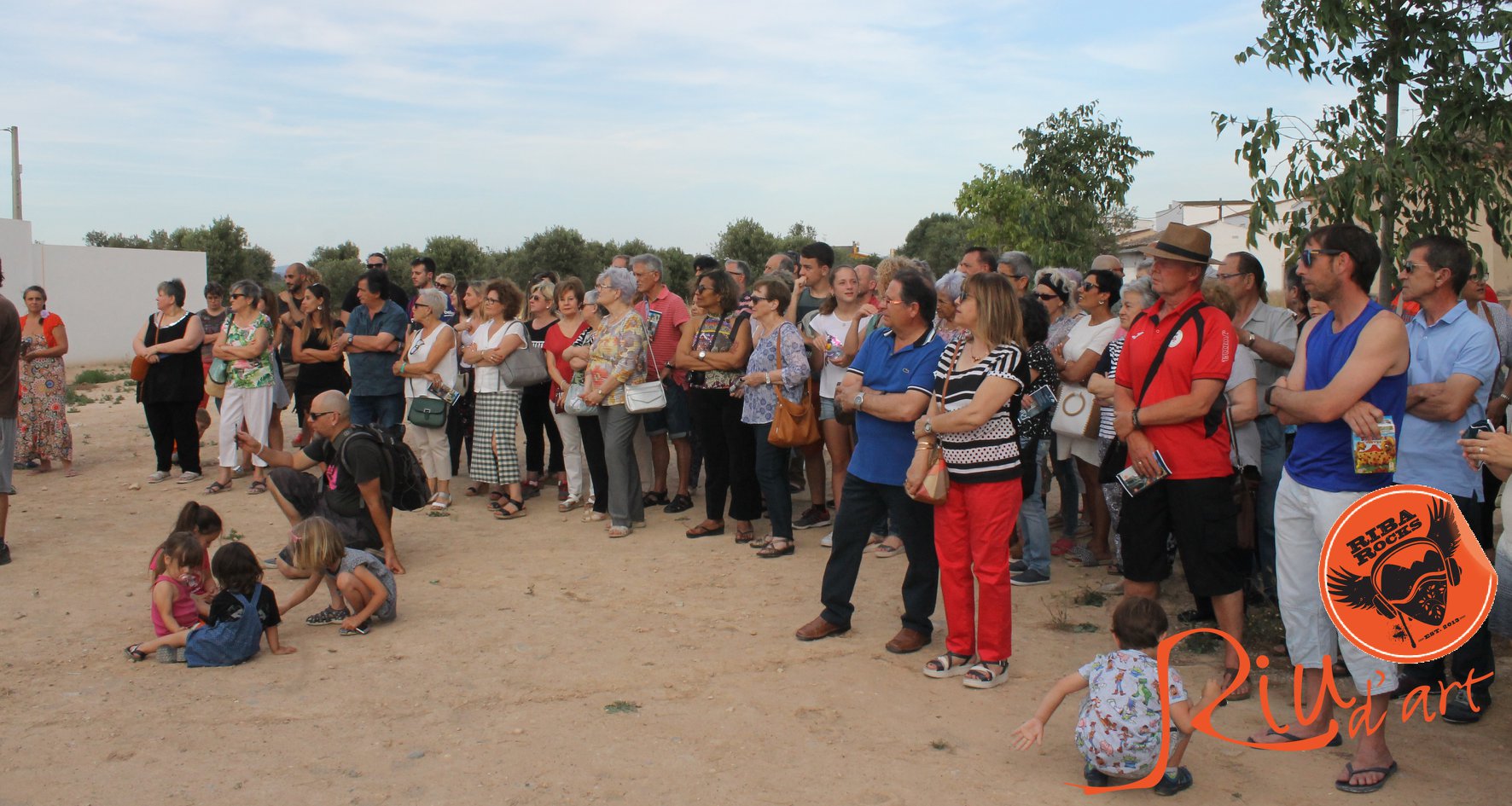 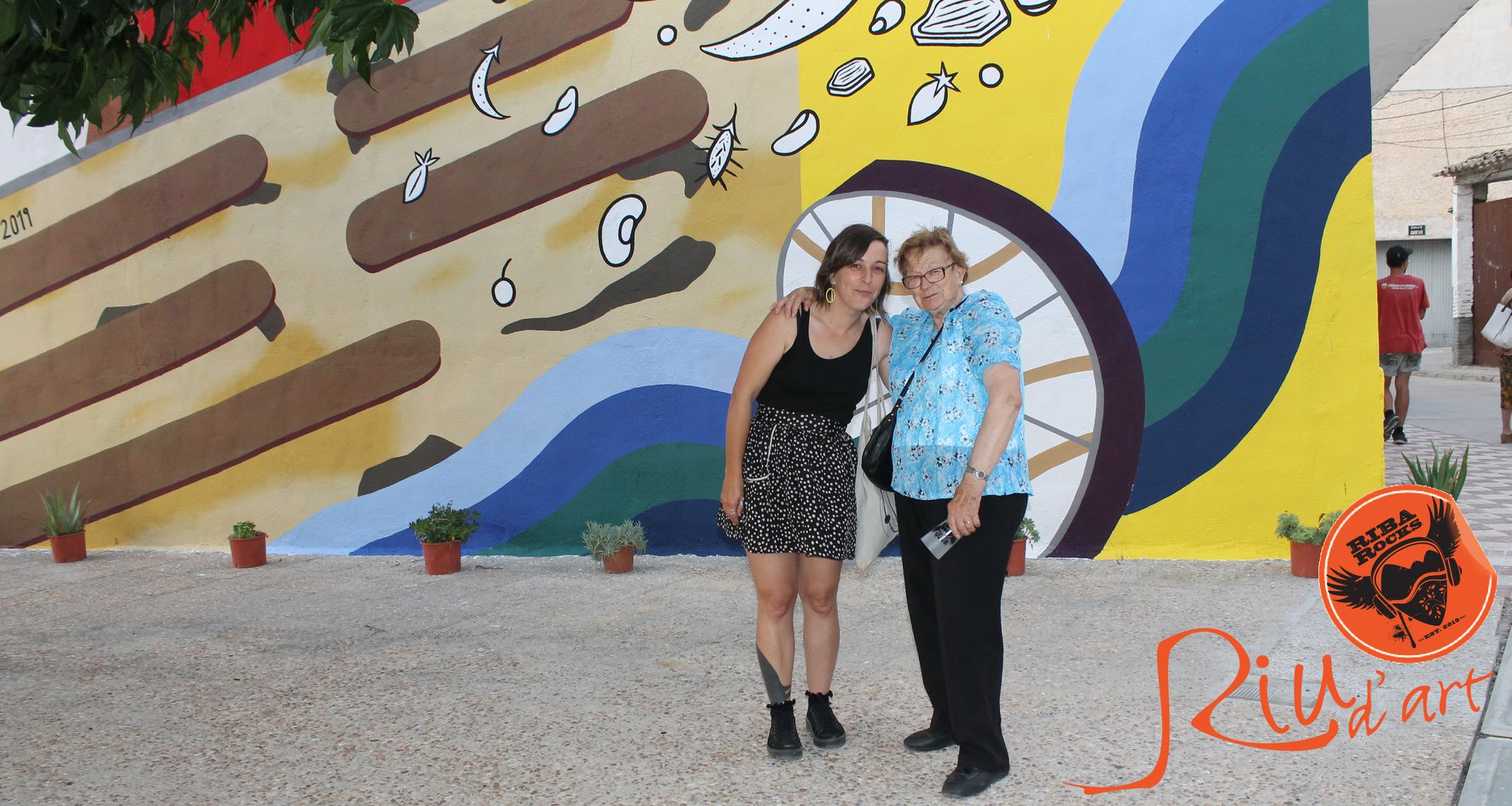 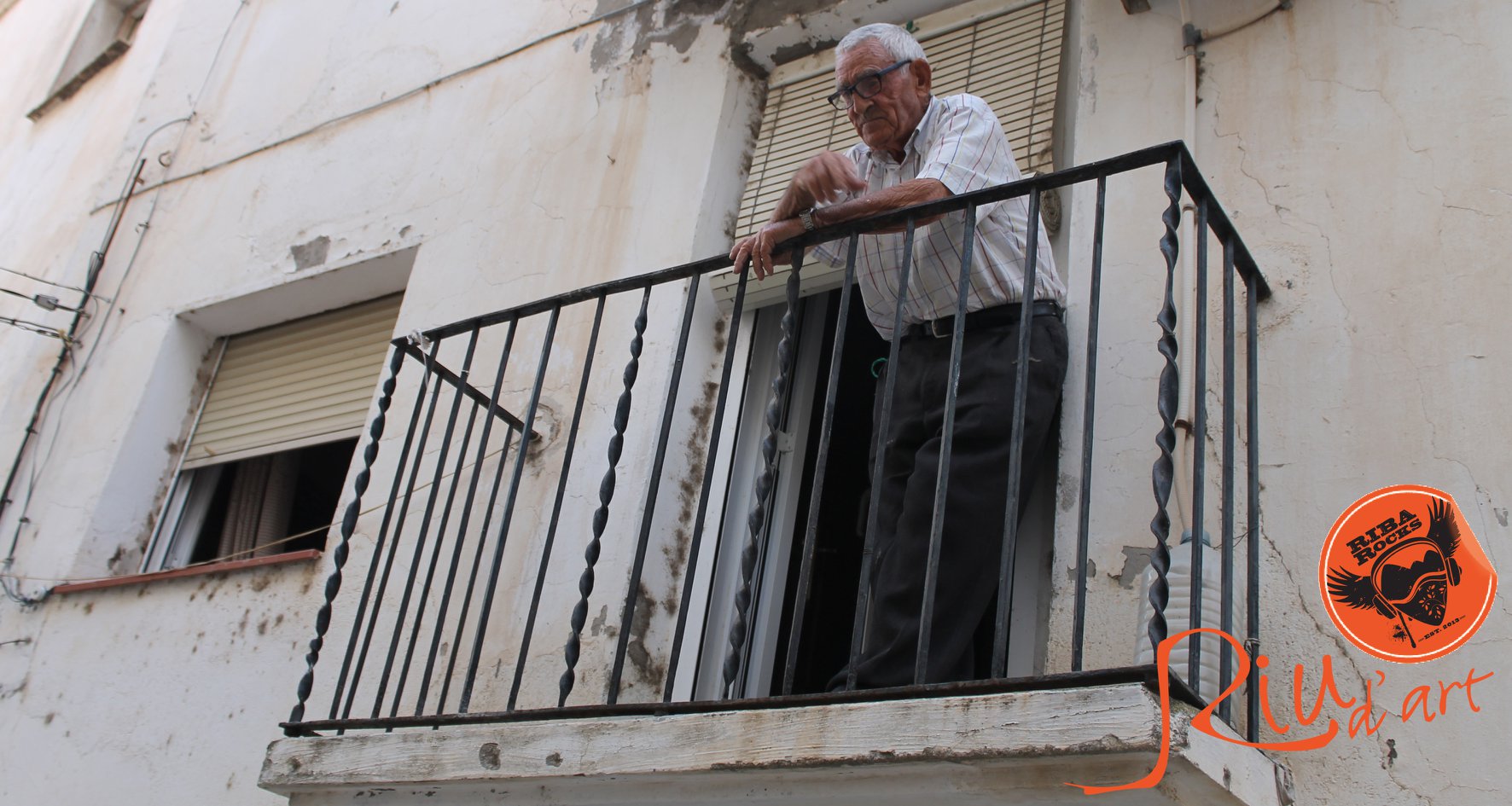 map of all the Riu d’art artworks

As I walk the streets of Riba-roja d’Ebre I feel the stories on the stones, facades, doors and windows. Architecture that frames custom scenes that have been, that are happening, that are to come or that could have been. Spaces of community, family, love and war, lovers of a mythical river that escapes the time of men.

The plate is a symbol that serves to connect the river with its people. The colours of the water, with glazing enamel treatments of copper oxide and cobalt, which are a nod to the pottery tradition in both an archaic and current form. Gastronomy also has its space as a living culture and symbol of brotherhood, meeting and conversation. The mural contemplates the river from a privileged viewpoint dedicated to a great tributor of stories of this land, Jesus Moncada.

The work invites contemplation, to the memory and to a projected future marked by the Ebro.

Adrià Cid (Barcelona, 1989). Bachelor of Fine Arts from the University of Barcelona, where he began in the audiovisual field and went deep into multidisciplinary sculpture until at the University of the Basque Country where he began to work with ceramics. Since 2012 he is studying Artistic Ceramics at the Llotja School of Art and Design (BCN). His works have been shown in different locations of the Terres de l’Ebre, Strasbourg, the Sala d’Art Jove, DHUB in Barcelona and other spaces. He also exploits the musical side performing as a singer and luthier.

Anton Behrendt
Riba Rocks ! Fantastic open air muralscapes,emblazon numerous buildings around this idilic Catalan village nesstled high in an oxbow of the river Ebro. This art gallery is expanded every summer as artists from around the world are invited to augment the collection. The riba-rocks possie run guided multlinual tours too.the old bakery's tree of life and the ominous giant spider on the main street my personal favorites. Very easy place to get to by train so even worth a day trip

Donna Saville
Riu d'art tour We really enjoyed the Riu d'art tour. So often, as a tourist, you visit a city or town but never really see as much of it as you would like. You may visit the supermarket or café but leave before you have seen all it has to offer. The tour offered us just that. We had the opportunity to really get to know the area and the art tour made this fun for all of us. The children enjoyed spotting the art pieces and the information provided was just right to bring them to life. The lovely weather and character filled streets made for a really delightful afternoon.

CreativeGrishArt
An art gallery in the streets of a beautiful rural Catalan village From the moment I stepped off the train I saw the first piece of artwork, a large scale painted mural on the gable end of a crisp white house against the bright blue sky. What a welcome! The village of Riba-roja d'Ebre is beautiful and these pieces of contemporary artwork add moments of such creativity to the place. There's something for everyone, from illustrations, murals, sculptures and installations. There were these handy little boxes around the village which contained the maps, so we found it easy to get around and see all the artworks. The best thing of all, there were plenty of bars along the way to have regular cold beer breaks! A great idea, the art really compliments the historic architecture and the people are really friendly.
Tripadvisor rating score: 5.0 of 5,
based on 3 reviews

The best way to experience the Riu d’art Open Air Gallery is with a guided tour! The Riba Rocks association members offer guided tours in either English, Catalan or Spanish. A perfect activity for all the family. (Tours are free, although a donation to the association would be greatly appreciated.)

We offer guided tours throughout the summer months. The tour is completed in two parts, a morning stroll and an evening walk. With a long lunch and siesta break in between. If you would like to book a guided tour fill in the form below.

If you are visiting Riba-roja d’Ebre and would like to stay, we can recommended accommodation. Riba Rocks can arrange lunch for you at a local bar or restaurant as part of the day tour. The tour offers you an insight into the background of each artist and the concept behind their work in Riba-roja d’Ebre.

It is a great way of seeing the beautiful, village streets and other sites along the way. You will be given your own map which indicates where each artwork can be found. You can then revisit or recommend to a friend!